The 11th Cavalry Memorial is located in Pattons’ Park at Fort Benning, Georgia. The memorial is dedicated to the bravery and selfless sacrifice of countless Blackhorse troopers who have served with the 11th Cavalry since the regiment was formed in 1901. The monument has an interesting and unique history.

In September 1966, the 11th Armored Cavalry Regiment arrived in the Republic of South Vietnam. Almost immediately the regiment began conducting operations. Over the next six to eight months the regiment excelled in every operation it conducted. But this success was not without the great sacrifice of many brave and dedicated Blackhorse troopers.

In the spring of 1967 a suggestion was made to create a memorial to honor the sacrifice of these fallen soldiers. Several Blackhorse chaplains were involved in planning the memorial. With the help of the 919th Engineer Company, a large granite stone was cut from the Gia Ray rock quarry located near the Blackhorse base camp at Long Giao near the town of Xuan Loc.

The stone was transported to local stone cutters where it was chiseled, shaped and smoothed into a four-sided obelisk that would become the memorial. The finished stone was placed in front of the Regimental Chapel at the Blackhorse base camp. To honor each of the fallen troopers, a small brass name tag was attached to the monument with the trooper’s name and casualty date. In the fall of 1967, the monument was officially dedicated.

In the years to follow, the regimental chaplain would continue to add brass name tags to the monument as the regiment suffered a casualty.

In late 1969 the regiment was assigned a new area of operation and would move to another base camp, first to Quan Loi then later to Di An. With each move the monument was carefully packed up and accompanied the regiment, always being located with the Regimental Chapel.

In March 1971, as part of the draw down of US Forces in Vietnam, Regimental Headquarters along with 1st and 3rd Squadrons were deactivated. After 5 1/2 years, after 2,040 days, and an estimated 25,000 troopers, the regimental colors would be cased and returned to the United States.

Personnel were reassigned. Equipment and assets of the regiment were turned in. Perhaps one of the greatest challenges during the deactivation process, and equally the most important action, was crating and shipping the Blackhorse Memorial. The monument represented the sacrifice of so many fallen troopers. The monument was also a tangible piece of history of this great regiment. It must be preserved.

Once again the monument would be carefully packed up and moved. The new home would be in front of Gaffey Hall, the Headquarters of the Armor School at Fort Knox, Kentucky.

In the early 1980’s, the monument was moved to the Armor Memorial Park near the Patton Museum. The individual brass name tags were replaced with four bronze plaques listing the names of the 730 fallen troopers from Vietnam.

In 2005, while the regiment was deployed to Iraq, a project was undertaken to expand the memorial to honor all fallen Blackhorse troopers from all campaigns and conflicts since the regiment was formed in 1901. Extensive research was done to determine the names of each trooper from each campaign.

In 2007 three new obelisks were added honoring all fallen troopers. One honors the troopers of the Philippine Insurrection in 1902-1904 as well as the Mexican Expedition in 1916-1917. A second honors World War II in 1944-1945. A third honors the Gulf War 1991 and Operation Iraqi Freedom 2005-2006. To help fund the project, engraved granite bricks were offered. Over 900 bricks were purchased by Blackhorse veterans and placed around the memorial. Many bricks contained messages of support, pride of service and remembrance of close friends.

The move also provided an opportunity to add several new features. A bronze plaque was added in front of the Vietnam monument with a narrative of the history and special significance of this particular monument. Two large granite tablets were also added. One tablet contains a brief history of the 11th Cavalry since it was activated in 1901 and features a large Blackhorse insignia. The second tablet lists the 23 campaign credits of the 11th Cavalry since 1901 along with the regiment’s unit crest.
The 900 granite bricks were also moved from Fort Knox. They were combined with 650 new bricks, interlocked and arranged in four sections surrounding the monuments as though to guard the names listed on these bronze plaques.

Despite the many moves and regardless of where it is located, the 11th Cavalry Memorial will always honor every fallen Blackhorse trooper for all eternity. All Americans must remember the sacrifice of those who serve our country.

Written on the last few lines of the bronze plaque at the base of the Vietnam monument are these words: “Despite all these changes, the rock remains the same. Quarried on the battlefield and drenched with the sweat and blood of countless Blackhorse Troopers, it remains a touchstone for why we served. It reminds us all that what we did was honorable, but not without great cost and sacrifice.” 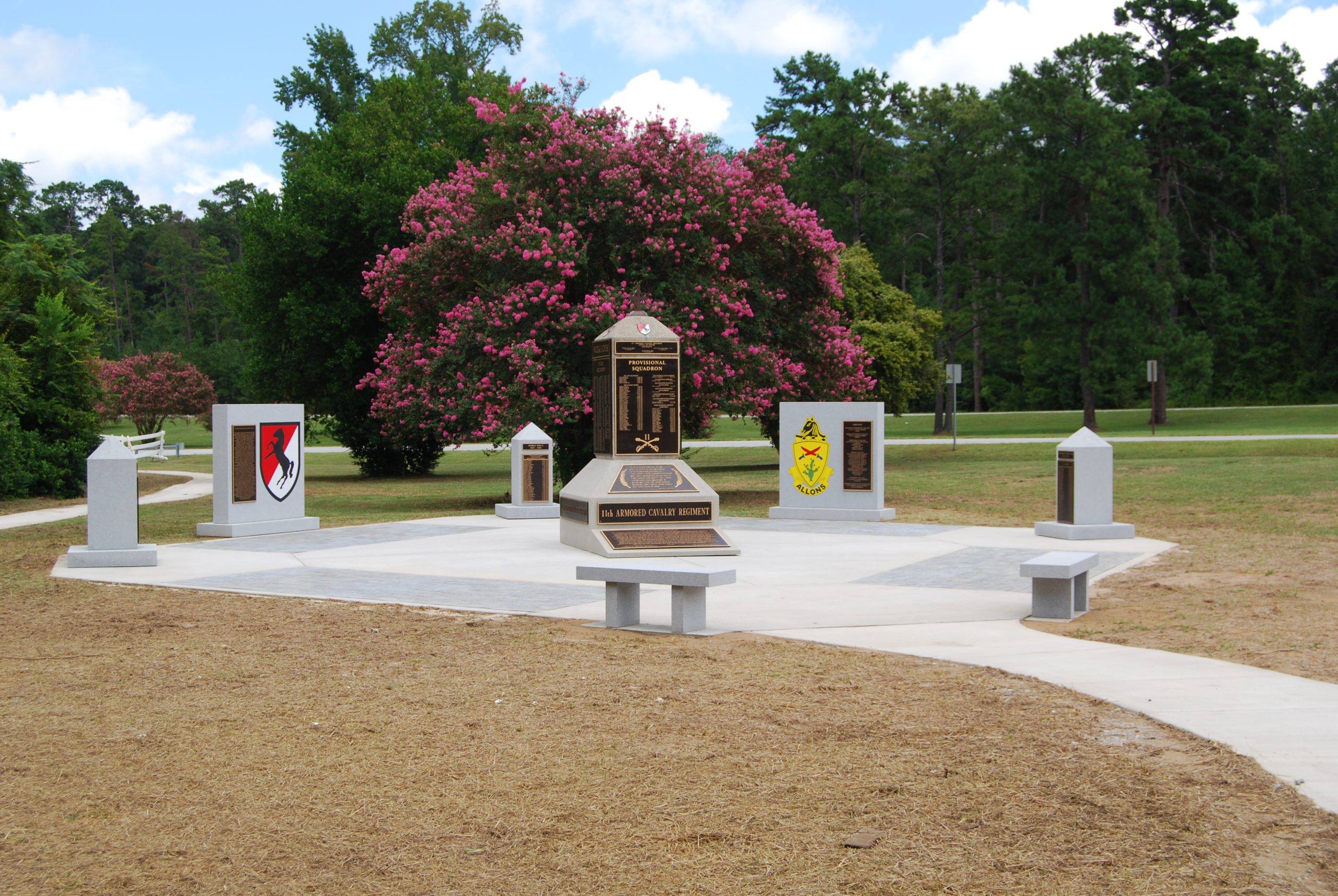